rise up and bake

OMG I LOVE FOOD SO MUCH!

hhmmm, seems i am always planning on making more regular posts! this time i shall MO DEF try my best to become a regular blogger!

i’ve recently been receiving the jura books organic food co-op box of veggies – a fabbo decision! for $10 i get pretty much all the veggies i need for the week, plus a few bits of fruit. gives me an excuse to head down to addison road markets on a sunday and indulge in the best satay burgers you will ever taste!

these veggie boxes are also giving me a greater understanding of seasonal produce and expanding my recipe repertoire. i seem to be left with random collections of veggies by about wednesday. last week i had a nice colourful bunch: 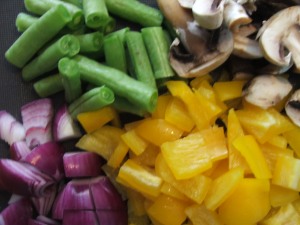 people are constantly on at me about the health effects of a vegan diet – mostly on the negative side. i generally don’t worry too much about the ‘healthiness’ of my diet (cupcakes at 3am, anyone???) but one issue that does concern me is vitamin b12. if one become deficient in b12, irreparable damage is done to the nervous system. i think we need b12 for cell reformation, in particular blood making (so not enough leads to anemia).

i did a little research, and it seems we humans need about 2.4 micrograms of b12 each day – not too much! our bodies can store between 2 and 5 micrograms each day, so it’s possible to build up stores of the stuff. people (such as myself) generally have good stores from their meat eating days, but it’s a good idea to keep an eye on it.

(here is some great info from the vegan society)

something i do NOT usually eat is tempeh*. for some reason i just can’t get into it. i think it has to do with the texture. in the name of good health (and in an attempt to use the cookbook tempting tempeh which i haven’t cooked from in the 8 months i’ve had…), i decided to give it a crack!

(* indicates modified according to what i had)

i ate mine with quinoa (pronounced keen-wah), the super grain! yummo! 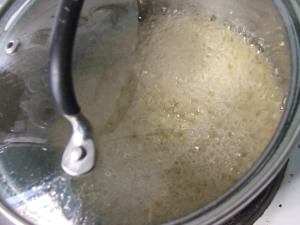 quinoa is really easy to cook, kinda like rise. just make sure you rinse it first! otherwise you get all these little white bits in it – looks like maggots. gross! speaking of which, the final meal kinda looked a little off-putting. and the texture of tempeh still gave me shivers. yummy sauce though:

* even though everyone says the only way to get b12 in an absorbable form is with fortified foods, i think it can’t hurt to eat things that have “natural” b12, eg seaweed, miso and tempeh.